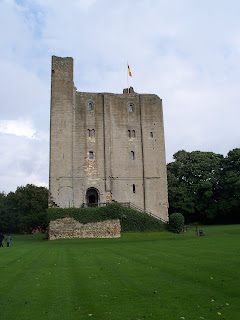 A talk given by CFD Sperling: to an unknown audience probably in the early 1930s.  The paper was found in the Society’s archives.

The name of de Vere is inseparably connected with the history of Hedingham Castle, for Aubrey de Vere, who came over with William the Conqueror, was rewarded for his service by a grant of manors in five different counties; amongst them, that of Hedingham.  It had long been a place of importance, the hill overlooking the ford on the river Colne where the men of the Hundred were accustomed to meet, which must have been a stronghold in Saxon times or even earlier.

The first Aubrey de Vere, who came here, probably found a conical stockaded mound that had, up to that time, served well enough as a place of defence.  He would seem to have levelled the crown of this and to have extended its area so that it found in effect a raised plateau.  Probably he was content with a timber structure within a stockade and with his surrounding moat, he felt sufficiently secure.

On the south slope of the hill, before the date of the Domesday survey, he had planted a vineyard of six acres and wild vines remained there until the 18th century. His son, however, the second Aubrey, a trusted Minister of Henry I, not being satisfied with the timber structure, between the years 1130 and 1140, set up the great stone keep, which we still see, for except where parts have been torn out or broken down, the work remains in a surprising condition of perfection.

The surrounding buildings, the curtain wall, the gateway tower (which stood to the south of the keep), the great hall, the pantries, the Chapel and numerous lesser buildings which were grouped around the keep, are now represented only by a few foundations and grass grown mounds.

The ground plan of the great keep is not an exact square, the outside dimensions above the great bottering plinth being 58 feet (north to south) by 52 feet (east to west). The walls are about 11 feet thick, and it stands 85 feet high (without the battlements).  It is built of stone from Barnack in Northants, but how the stone was brought here is a matter of conjecture.

This keep is among the finest and most complete examples of 12th Century Military Architecture in England. The condition of the tower is extraordinarily perfect.  The walls and arched recesses still retain internally the original plastering.

Its severity of outline is noticeable. The only external ornament – with the exception of the great doorway which was obviously originally covered by a fore-building – is seen in the three upper tiers of the windows.

The basement was used partly as a kitchen and partly as a prison dungeon.  There is a well in the south west angle inside, and another well outside, north of the tower.

The first floor, into which the great doorway opens, was used as a guard room.

On the second floor is the Audience Chamber or Armoury with gallery around it in the thickness of the wall. The great feature of this (and indeed of the Castle) is the magnificent semi-circular arch which spans it from west to east.  The great span, 29 feet, and rise, 13½ feet, of the arch are the more marked because of the responds, or piers, being only 7 feet high.  In fact, it is the creation of which any architect would be proud.  The fire places, both here and on the floor below, are noticeable as unusually fine 12th century hearths.

All the floors have small chambers for sleeping places in the thickness of the walls.

The third floor was probably used as a dormitory.

A bridge of brick, c.1500, comes to the castle mound with the outer bailey, where now stands the fine house built by Robert Ashurst in 1719.  All the foundations of the surrounding buildings which have been exposed show that they have been re-built late in the 15th Century, as Leland relates, after the Battle of Bosworth by the 13th Earl, who lived here in splendour, exercising a magnificent hospitality.

In the time of Aubrey de Vere, 1st Earl of Oxford, on 3rd May 1152, it was recorded that Queen Matilda, wife of King Stephen, died at Hedingham Castle and was taken for burial at Faversham Abbey, Kent.

The Castle is next heard of 1215 when it was captured from the rebellions Barons by King John, and, two years later, it held out against Louis, the Danfir, and was captured with difficulty.  Whether the castle was surrendered owing to treachery or famine it was not stated.

John de Vere, 13th Earl of Oxford, was one of the chief supporters of the Lancastrian party in the War of the Roses and took a leading part in the Battle of Bosworth Field.

At the restoration of King Henry VI to the throne in 1470, he bore the King’s sword. He was afterwards held in great favour by King Henry VII who bestowed many honours upon him, for besides being Lord Great Chamberlain, he was created a Knight of the Garter, made Lord High Admiral and Constable of the Tower.

In 1491 he stood godfather to the King’s eldest son, afterward King Henry VIII.  A few years later, in 1498, he entertained the King (Henry VII) at the Castle of Hedingham, with great magnificence, from 6th to 11th August, and on leaving, the King passed down from the Castle to the Village between a double row of the Earl’s Retainers, each wearing a blue livery with the Earl’s badge. These men far outnumbered the legal retinue of an Earl, viz 130 men, so when the King reached the end of the line, he paused and thanked the Earl for his entertainment, but added ‘I may not endure to have my laws broken in my sight. My Attorney must speak with you about it.’  This breach cost the Earl 15,000 Marks, a sum perhaps equal to £100,000 at the present day.

The amount of the fine seems incredible, but it rests on the authority of Francis Bacon, the historian of the reign of Henry VII, who relates the story as so reported in his day.

John de Vere, the 16th Earl, entertained Queen Elizabeth and her suite in the Castle August 14th to 19th 1561.  He died the following year and was buried in Castle Hedingham Church, in the same tomb as his father, 31st August 1562.

But his son and successor, Edward de Vere, the 17th Earl, does not appear to have lived long in the Castle, so that at the end of the sixteenth century, it was unoccupied and partly dismantled through his caprice and extravagance.

He sold off the greater part of the de Vere estate, and quarrelled with his father in law Lord Burghley, who at last purchased the Castle and settled it on his daughter’s issue.  This 17th Earl was a poet of merit, and we are now told, by some that he was the real author of the works of William Shakespeare.

It is accorded to Bakers’ Chronicle that the Castle buildings were further purposely ruined during the first Dutch War, in 1666, to prevent the use of them as a prison for the Dutch Sailors taken in the Sea engagements.

However that may be, from the Survey of the Estate made in 1592, it is evident that the dismantling of the buildings had even then commenced.  Three towers that had stood around the keep are referred to as “now destroyed by Variant of the (17th) Earl,” and are noted on the plan as having “the lead, timber, iron and glass taken away.”

Some remains of the ornaments of the old Castle have survived. The interesting carved stone badges of the 13th Earl, which were noted by Rev William Tillotson, in 1594, as being over a door in the Castle, may now be seen over the west window of the Church.  Whilst the carved stone panel representing the Battle of Bosworth, which was doubtless set up by the 13th Earl, one of the leaders of the Lancastrian forces, is to be found over the door to the Library of Stowe School, whither it was removed by the Duke of Buckingham.

The continuance of this family in the male line, and its possession of the Earldom for more than five and a half centuries, has made its name a household word.  Its ownership of the Castle ceased in 1625, on the death of the 18th Earl without issue, but the title passed to a distant cousin, the 19th Earl, and on the death of his son (the 20th Earl) without a son in 1702, became extinct.

After some vicissitudes, the Castle Estate was eventually purchased in 1713 by Robert Ashurst, a son of Sir William Ashurst, Lord Mayor of London in 1693, and passed by marriage in 1783 to the family of the present owners.

When Mr Ashurst purchased the Estate, the Keep was but an empty shell, but he soon took steps to put it in a state of repair with new roofs and floors, and as it remained until the unfortunate fire in September 1918.

A wooden Observation Hut was built by the War Office on the top of the tower and this caught fire early in the morning of September 23rd.  The fire soon spread to the tower roof, and there burnt its way down from floor to floor until the whole tower was gutted.  The stonework, however, was in no way injured, and as no fire-engines were available until the fire had practically done its work, the masonry did not suffer, as in other cases, from the pouring of cold water on heated stonework, so that now the floors have been replaced and we can contemplate the architectural features of the great Keep with the same pleasure as before.

The Priories of Hatfield Broad Oak and Earls Colne were founded by Aubrey de Vere, and this Church of Earls Colne Priory was the burial place of many of the family, five of the recumbent effigies of the de Veres, removed from that Church, are now preserved in the little Chapel of St Stephen in the parish of Bures in Suffolk.

Two only of their tombs now remain in this county, viz: that of Robert de Vere, 3rd Earl, who died in 1221, in the Church of Hatfield Broad Oak, and, John de Vere, the 15th Earl and Elizabeth his wife, 1540, have an altar tomb in the Church at Castle Hedingham.

In the words of Lord Justice Crewe, in the time of Charles I, “Time hath his revolutions: there must be a period and an end to all temporal things, an end of names and dignities and whatsoever is terrene; and why not of de Vere? For where is Bohun? Where is Mowbray? Where is Mortimer? Nay what is more and more for all Where is Plantagenet?  They are entombed in the urns and sepulchres of mortality. And yet let the name and dignity of de Vere stand so long as it pleaseth God.”
Posted by Andrew Smith at 00:00

Email ThisBlogThis!Share to TwitterShare to FacebookShare to Pinterest
Labels: Archives