The Society is sorry to record the death of John Ashdown-Hill, the historian who will be remembered for his role in the discovery of the body of Richard III in a car park in Leicester.  He was a speaker at a Morant Lunch in recent times, talking about Greyfriars, Colchester.  More on the BBC website: http://www.bbc.co.uk/news/uk-england-essex-44225404
Posted by Andrew Smith at 17:28 No comments:

A free talk, organised by Monumental Brass Society, in conjunction with Rochford Hundred Historical Society, Rochford Town Team and Essex Society for Archaeology and History. There will be 3 speakers and the event is to celebrate the relocation of the Brass to Thomas Stapel 1371. Why not join a tour of Rochford in the morning, tours start at 10am and 12 noon. The tours are free, but donations to the guides are accepted. To book your ticket go to Bookings for Thomas Stapel and enter the password ‘stapel’. More information will be found in a flyer in the next ESAH newsletter.
Venue: St Andrews Church Hall Road Rochford SS4 1NW. Free, donations welcome.
Posted by Andrew Smith at 00:00 No comments:

To buy copies of our Transactions from Third Series Volume 31 visit our new Online Bookshop.
Posted by Andrew Smith at 09:31 No comments:

What is happening after our AGM at Hill Farm, Gestingthorpe?

Further details are announced regarding the Essex Society for Archaeology and History' Annual General Meeting on Saturday 9 June 2018.

After the formal business, Ashley Cooper, the farm owner, will offer a tour of the Hill Farm Museum, with its exhibits from geological times to the Second World War. These also includes a medieval Guildhall, an eighteenth century corn barn, rural bygones and artefacts from the Roman Villa. There will also be an opportunity visit the site of the Villa and the current archaeological excavations, where a Romano-British ritual site may have existed.

Posted by Andrew Smith at 07:29 No comments:

Due to circumstances beyond our control, we have had to change the venue of this years Morant Lunch. The new venue is Intimo fresco 116 High Street Maldon. The date, time and speakers remain the same.

Our Programme of Meetings has been updated.
Posted by Andrew Smith at 07:21 No comments:

Leyton & Leytonstone Historical Association: A Tour of Leyton in Picture Postcards. Wednesday 16 May 2018 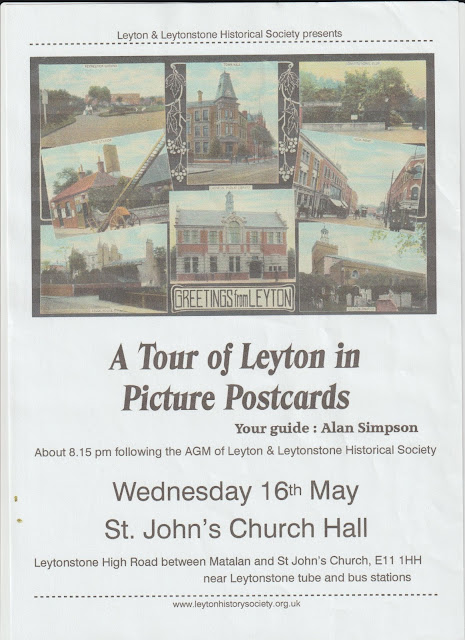 Posted by Andrew Smith at 19:06 No comments:

Please find below details of the last talk in the 2017/18 season for the Essex Branch of the Historical Association:
'Was there a "Golden Age" for Women in Medieval London?'
A talk by Professor Caroline Barron
Professor Emerita, History Dept. Royal Holloway College, University of London
on
Saturday 12th May 2018 at 2.30pm in the Trinity Methodist Church, Rainsford Road, Chelmsford, CM1 2XB

It is usually assumed that women were almost invisible in the medieval period: very much the subordinate partners in marriage and unable to achieve economic or social independence. While it is true that for much of the medieval period (and later!), women were underpaid and undervalued, yet in the 150 or so years following the Black Death of 1348-49, women in London enjoyed a public profile and were able to take advantage of considerable economic opportunities. The situation changed again in the sixteenth century and the reasons for this will be explored in this talk.
Visitors and prospective members warmly welcome.

Posted by Andrew Smith at 19:04 No comments:

Good news at the Colchester Roman circus visitor centre: due to its success and to the positive response from visitors, we have extended our archaeological art exhibition until the 30th June! Read more on the Trust web-site at https://www.thecolchesterarchaeologist.co.uk/?p=41574 . Some great visitor comments about the exhibition, written in our visitors' book: ‘Amazing exhibition’ - ‘Fantastic display’ - ‘We loved it. Very talented artist’ - ‘Fascinating stuff. Congratulations to you all and thank you’. We are glad that people are enjoying the exhibition - we think it's great!Open 11.00 am-4.00 pm, Tuesday-Saturday; admission to the visitor centre is free, but we ask £1 per person for admission to the exhibition (price includes an exhibition catalogue).We look forward to seeing you!
Posted by Andrew Smith at 19:26 No comments: