The Hyde, Ingatestone: Eulogy For A Country House School 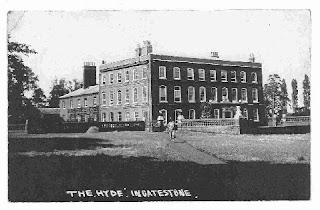 The Hyde, Ingatestone, was the seat of John Disney the first President of the Essex Society for Archaeology and History.  During the twentieth century until gutted by fire it was a school.

EULOGY FOR A COUNTRY HOUSE SCHOOL

Discovering this article and other references to The Hyde Ingatestone, immediately evoked suppressed memories of long past familiarities.

As a pupil spending my formative years here, I also recall the rows of servants' bells in the lengthy corridor leading between lofty kitchens and wood panelled dining room, summoning past eras of wealthier times.

Privileged highlights amidst the dull chalk dusted lessons were officially escorted introductions to the dizzying heights of the rooftop balustrades or the dark dank depths of the cellars. In the stable block heavy archaic accumulators were clues to an earlier, more prosaic source of electricity.

Most exciting of all was a secret room entered by way of an opening bookcase, its subtly hinged shelves lined from floor to ceiling with false leather bound first editions. The wide oak floorboards in front of the books maintained a highly lustred finish with the enthusiastic aid of fleet footed boys organised into skating parties, fiercely sliding up and down in outsized football socks. In a room on the third floor (no doubt out of bounds) silent stacks of redundant cast iron bedsteads remained as inherited evidence of the house's use as a military hospital during WWI.

The date 1719 is for some reason embossed on my memory as surely as it was on the cast iron tops of guttering down pipes beside certain bricked up windows.

As a school, typical 'Basil Fawltyesque' ideology was nurtured from an early age; high moral values indoctrinating tender young minds. We were systematically encouraged to feel pride in being British: superior.  Psychology was a load of tommy rot.  Anyone speaking with a regional accent was a yob. Break times in the shrubbery provided initiation and intensive instruction into the extra curricula activities of fighting smoking and bullying.

The greatest tribute payable to the Hyde School, its highest possible accolade, most praiseworthy of progenies and ultimate achievement, is the fact that it was burnt down. It bequeaths a legacy of ploughed up arable fields.
Posted by Andrew Smith at 17:59

What a wonderful description. My ancestors were the Disneys who owned The Hyde. My Dad and Grandfather knew this place very well. Thanks for posting this.