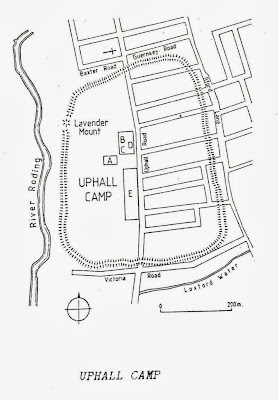 In this extract from the Essex Archaeology and History News, published in Winter 1987, we continue the story of Uphall Camp.

We are currently excavating the interior of Uphall Camp, with funds from English Heritage, the London Borough of Newham and Whithorn Ltd. The Camp was first recorded on a map of 1735 but has had a chequered history - its final fate. After being the site of a chemical works Is to be totally covered by housing. Unfortunately almost nothing of the original fortification can be seen today, although traces were recorded by Crouch last century before the building of Howards Chemical Works; and photographs taken in the late nineteenth century show the rampart and Lavender Mount. In 1960 the Passmore Edwards Museum found traces of the single rampart and ditch forming the defences of this large enclosure (43acres/19ha). Pottery from the ditch and from the current excavations is datable to the later Middle Iron Age, perhaps the 3rd or 4th centuries BC. 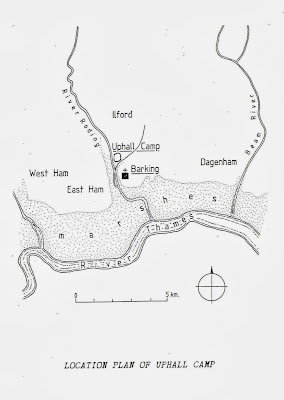 So far, we have excavated two round houses, a circular domestic or agricultural building and most recently a possible rectangular building.  Associated with these buildings are traces of at least four four-posters’-small, square structures which are probably raised granaries. Large quantities of charcoal and burnt grain and other seeds should give us an idea of the crops grown by the Iron Age farmers and of the surrounding wild vegetation.  Soil conditions are such that no bone has been preserved.  There are also signs of the site being divided up by boundary ditches, perhaps making separate properties.

An unexpected surprise was the discovery this summer of what appears to be one side (the ditch) of a late Roman (3rd – 4th century AD) signal station or watch-tower.  It seems to be square in shape and has relatively deep v-shaped ditches.  From the tower it would have been possible to look over large areas of what are now East Ham, Barking and Ilford.  The nearest similar structure is the signal station at Shadwell, east London.

After the Roman period the site appears to have been used for agricultural purposes; two of the ditches can be dated to the late Medieval or early Post-medieval period.  Even when the factory was in operation, his part of the site was kept as allotments until the 1960s.

If excavations continue to be funded for another six months at least, it is hoped to excavate double the present area. …