Fed up with football on TV messing up the schedules?  Want to escape the nonsense and do something more interesting instead?  We have the answer.

On Thursday 28 June at 8pm Jacqui Eykelbosch will be giving a talk on The Bardfield Painters.  The village of Great Bardfield during the mid-twentieth century became a well-known artists’ colony, among them Edward Bawden and Eric Ravilious.

This is a fixture you won’t want to miss.

The conference comprises three sessions of papers with twelve talks covering various aspects of Roman funerary archaeology and finds, primarily in London. We are getting more and more people to our meetings and this meeting will also be widely advertised by the Museum of London and MOLA marketing teams so early booking is strongly advised. The cost of the meeting is £18 for fully paid up RFG members, £15 for students and £22 for non-members. Attendance applications can be made by filling out the form below and returning it with the required payment to the address stated.

Book Sales/Poster Displays
There will be space for posters, and discussion during all breaks. There will also be space for the sale of books should anyone wish to do so. If so, please contact Stephen Greep in advance. MOLA will be offering Roman cemetery excavation reports for sale at a discount and PCA (Pre-construct Archaeology) will be selling discounted copies of their Roman Burials in Southwark and other reports

Getting to the Museum of The London Docklands
The closest tube station is West India Quay - the museum entrance is two minutes’ walk. To find more information about getting to the museum please visit their website:
www.museumoflondon.org.uk/museum-london-docklands/plan-your-visit   and
www.museumoflondon.org.uk/museum-london-docklands/plan-your-visit/museum-accessibility

Questions and Further Information
More details about the exhibition Museum of London Docklands Roman Dead are available at https://www.museumoflondon.org.uk/museum-london-docklands/whats-on/exhibitions/roman-dead?gclid=EAIaIQobChMI9P_thPf_2AIVxbztCh1jsgfDEAAYASAAEgIyP_D_BwE. Questions about the RFG meeting should be emailed to Stephen Greep at: sjgreep@romanfinds.org.uk We look forward to seeing you.

Finds for the dead in Roman London and beyond
Conference Schedule

14.40    Kevin Hayward, PCA – Commemoration and Internment of the Roman dead in London: The use of stone

If you wish to attend the conference please complete the following form and return it with a cheque made out to The Roman Finds Group. Post to Stephen Greep, 6 The Redwoods, Willerby, Hull. HU10 6DQ

I would like the following (please indicate number of attendees):

**We treat the protection of your data seriously. Your information will only be used to correspond with you about the conference and not be passed to any third party.

The Essex Society for Archaeology and History regret to announce that due to unforeseen circumstances the visit to Rayne Hall and Church has been cancelled.
Posted by Andrew Smith at 20:13 No comments:

2018 Doddinghurst Stonley Festival
The Inaugural Doddinghurst Stonley Festival will be held in the Village on Saturday 23rd June  and Sunday 24th June.
Tudor fun for all the Family will be available as we celebrate the life of Richard Stonley, a diarist who lived in Doddinghurst in Tudor times, whose diaries are in the Folger Museum in Washington DC and who is the first recorded purchaser of a work of William Shakespeare.
As well as many events over the weekend (stalls, crafts, afternoon tea, games, children's activities, Tudor characters, dancing, music displays and history talks) -there are 4 ticket only events at the festival in June. Booking opened 10:30am Sunday 20 May
For more details on Richard Stonley & his historical importance - Click Here . Further event details available on the Doddinghurst Stonley Festival Facebook Page Here

Taken from https://www.all-saints-doddinghurst.co.uk/stonleyfestival
Posted by Andrew Smith at 09:43 No comments: 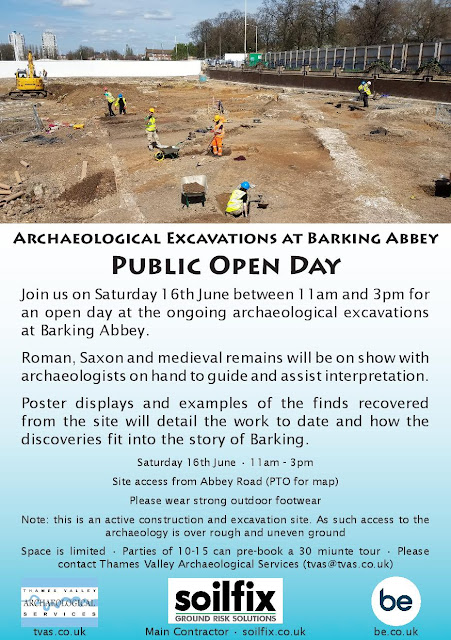 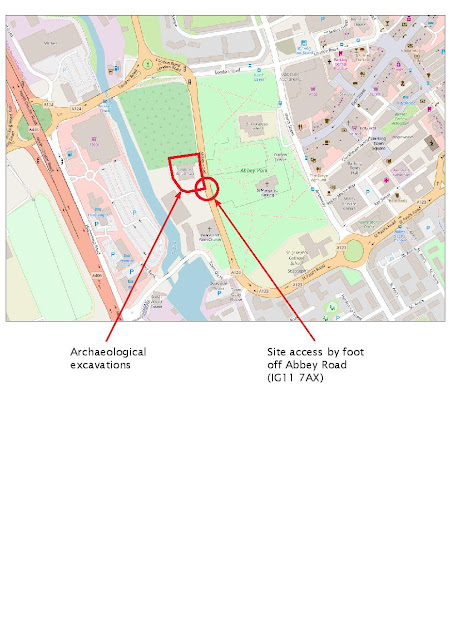 Posted by Andrew Smith at 13:47 No comments: 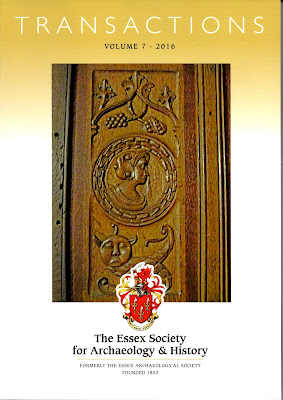 Members of ESAH will have received the new edition of Transactions, published May 2018.  It will be on sale soon through our Online Bookshop price £15.00 to a UK address including postage and packing.

Email ThisBlogThis!Share to TwitterShare to FacebookShare to Pinterest
Labels: Transactions 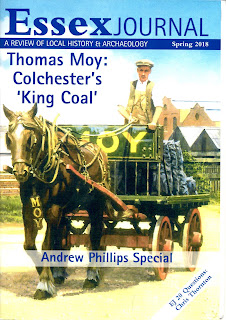 Subscribers to the Essex Journal, sponsored by the Essex Society for Archaeology and History, will have received the Spring 2018 edition recently (Vol 53. No. 1). In this edition, dedicated to Andrew Phillips historian of Colchester, are the following articles:
- Editorial
- News from the Essex Journal
- GeoPatterns Essex Walls Close Up
- Boxted Airfield 75th Anniversary
- What a Coincidence: Col. Seymour's Marauder
- Andrew Phillips: An Appreciation
- Cauldrons and witches on Head Street, Colchester?
- The Elegant Society of Georgian Colchester as depicted by James Dunthorne, junior (c.1758-1794)
- J.M. Churchill, MRCS, LSA: Colchester's Medical Coroner
- Thomas Moy: Colchester's 'King Coal'
- On the Brink: Colchester and the Czech Crisis of 1938
- Colchester Recalled: a unique archive
- Book Reviews
- EJ 20 Questions? Chris Thornton
Posted by Andrew Smith at 00:00 No comments: 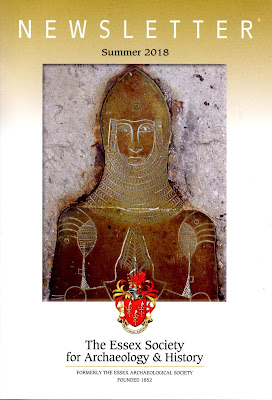 The Society's Summer 2018 Newsletter (NL186) has been issued for a few weeks now so that plenty of notice is given to members of the forthcoming Annual General Meeting, to be held at Hill Farm, Gestingthorpe on Saturday 9 June 2018.  Gestingthorpe has its association with the Oates family, and Captain Oates on Scott's ill-fated polar expedition of 1912. On The Antique Roadshow last evening (BBC 1 3.6.18) someone brought along buttons, an ice-pick and compass purported to have been owned by Oates.  A digression.

In this edition is focus on the movement of the brass to Thomas Satpel, a London B style brass, from the redundant church at Sutton to Rochford. A celebration will be held at St Andrew's Church, Rochford, on Saturday 14 July 2.00-4.00pm to which all are invited.

Items this time include:
- From the President, being the final contribution from Adrian Corder-Birch before he steps down from office after the three-year term
- Monumental Brass Society saves Thomas Stapel
- Report on Roman Cremation Vessel Funded
- ESAH, Froste and Mosaic all at Roman Circus House, Colchester
- EAH Transactions Seeks to Publish More History
- William Burges' Work at Waltham Abbey
- A Whale at Wivenhoe
- Wivenhoe High Street 100 Years Ago
- The Diary of an Ejected Minister: Revd. Frances Chandler of Theydon Garnon
- The Courage of an Essex Tailor: William Chieveling
- Life off Earth and the Rector of Orsett 1638
- The Peasants' Revolt
- Potins
- Apples and Orchards in Essex
- Award for Essex Journal
- Accuracy of OS Surveyors' Map
- European Route of Industrial Heritage (ERIH)
- Events in Essex
- Obituary: Jean Hewitt 1924-2018
- Gifts to Essex Record Office
- Book Reviews: The Parish Atlas of England - An Atlas of English Parish Boundaries

Posted by Andrew Smith at 10:22 No comments:

Blackmore Area Local History: Willingale Ring Saved and now On Display: Good news.  Epping Forest District Museum was able to secure the funding to buy the Willingale Ring.  It has just gone on display at Waltham Abbey.
Posted by Andrew Smith at 07:55 No comments:

Members will have received paperwork for the AGM in the latest Newsletter - details of of the Newsletter to be posted shortly.   There will be a book sale at the event.  'Full of Profitable Thinges', new £2 each, plus very last chance for surplus books.
Posted by Andrew Smith at 07:45 No comments: