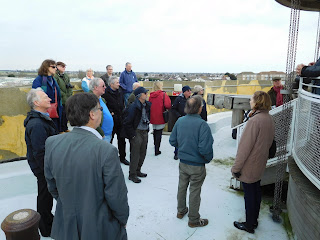 In defence of the vulnerable East Coast during the Napoleonic Wars, 29 Martello Towers were built between Brightlingsea and Aldeburgh. Jaywick is ‘Tower C’ but was beset with difficulties during construction owing to the marshy land and sank five feet into the ground.  It took three years to complete and when finished in 1812 the war was over. 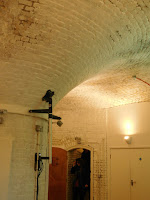 It contains 750,000 bricks which came from Grays and were landed on the beach by flat bottomed barges. Construction could only be done during the summer months because of the difficulties in using lime mortar. 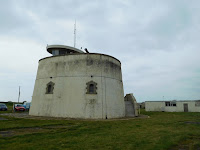 Access was originally to the first floor, the living quarters designed for 24 musketeers. The ground floor was for storage of supplies, food and ammunition sufficient for a month’s stay.  Many soldiers stayed at Weeley Barracks a few miles away.  The open top, the gun deck, once held three 24lb cannons and three howitzers.  The glass cabin is a later addition intended as a coastguard lookout. 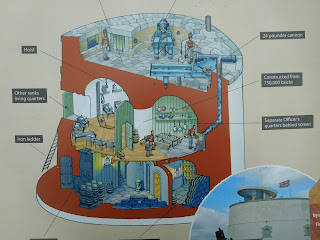 Thirty-eight members of the Essex Society for Archaeology and History attended this Friday lunchtime meeting.  Now a museum, Jaywick Martello Tower is open during the summer months.
Posted by Andrew Smith at 00:00