The Opening of the Romano-British Barrow on Mersea Island (3): Transactions n.s. Volume 13 Part 3

The report of the opening of the Mersea Barrow in 1913 was deficient of two Plates.  In Transactions Volume 13 Part 2 appeared a slip, "MORANT CLUB REPORT. Plates A and B will, it is hoped, be issued with the next Part in January 1914."  Plates A and B are copied below.  Plate A is of interest because it shows the trench dug from the east to the centre, and the 12 feet square 'room' which was shortly afterwards created as a permanent feature. 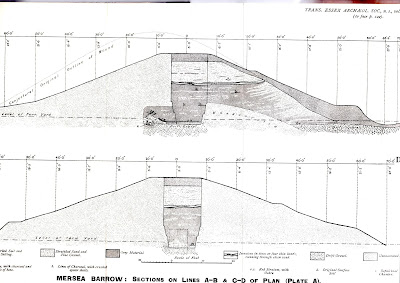