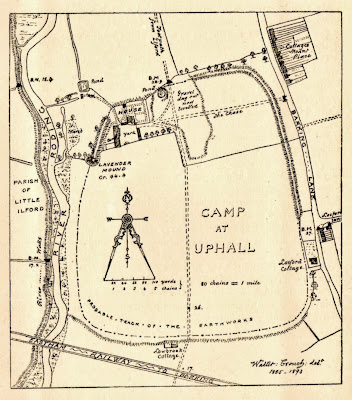 Notes on Ancient Entrenchments near Barking on the left bank of the river Roding.

Although the Essex Archaeological Society visited these earthworks on the 21st June, 1859, no record occurs in our Transactions concerning its origin or later history; and it is only mentioned incidentally as a Roman camp.

On that occasion a cold luncheon was served in a marquee put up the adjoining field, through the kind leave of my old friend, the late Mrs. Hunsdon, then resident at the manor-house of Little Ilford (1), on the other side of the river; who in later years removed to the house within this camp; and in both houses I have, in the past, enjoyed many a pleasant visit.

These earthworks have thus been familiar to me for over forty-five years: and in 1868, I prepared a MS. account and a measured plan ; when they were yet in a much better condition than at the present time. The plan of this "capital messuage and farm" is, in the main, based on the Ordnance Survey ; and records the condition of the entrenchments at that period.

The elevation of the land at Uphall is naturally so much higher than on the right bank of the river (Little Ilford parish), being some 20 feet above it, that no ‘wall' is needed even at the highest tide — the Roding even now being tidal up to Ilford ; but on the western bank, the river-wall, or ‘innings’ are some 15 feet in height: and these have been thrown up, long ago in the past, to prevent the ‘drowning’ of the manor-farm meadows, and are now carefully tended and repaired as occasion requires in order to prevent any reach.

The total area of the camp contained over 48 acres: and, for the past century at least, the best preserved portion was at the north-west corner, whereon the mound and a portion of the rampart (or spur) yet remain, and in much the same condition, being well protected by a covering of grass.

The height of this mound, at the time of the plan, was about 28 feet: but it now appears to be more rounded, and is probably somewhat lower through denudation. A portion of the rampart adjoins the mound, and is continued in a north-easterly direction for about 80 yards, behind the house and the large old barn (2) which stands at the foot of the mount. It has then been cut away and levelled at some distant period, perhaps to allow of access to the spring, the square pond, and water-cress beds, which lie low, between the rampart and the river.

The farm-house and buildings of Uphall are given on the large scale map of Chapman and Andre (plate xxi.), and also the stream at Loxford bridge, but there is no indication of either earthworks or mound.

Footnotes:
(1) This line old Tudor house with an octagonal lantern or outlook above the roof, has been pulled down during recent years, and the manor lands laid out for building.
(2) The dimensions of this big barn are worth recording being 120 by 29 feet.

For over a century this mound has been generally known as ‘Lavender Mount,’ the name being derived from one who occupied this holding ante 1809, when it was taken over by Mr. Hunsdon. (3)

Traces of the rampart were still remaining on the north, beyond the garden wall, until quite recent years, and partly up to the public footpath and stile ; on which was the Ordnance bench-mark 28.9; but this landmark has disappeared through the making up of a road through the middle of the camp to Lowbrook, on the old track of the footpath. Below this stile (within the camparia) was a large sloping hollow, some 14 feet in depth, and close up to the garden wall, which was due to the excavation of gravel in years past: while at the bottom was a small pond.

On the other (eastern) side of the pathway, a portion of the much lower rampart continuation had also been cut away, and a vast amount of gravel and sand removed, while beyond (as may be seen) the line of rampart rose somewhat higher, up to the rounded corner where the highest portion was then some 12 feet above the outer level, with a slope of about 4 feet on the inner or camp side. Southward the continuation was quite traceable to the first hedge, but very low, being there only some 18 to 20 inches above the general level ; and was, of course, entirely cut away on the ‘chase’ or drive, leading from the gateway to the house.

Beyond, by the little paddock, it had gradually levelled down and disappeared ; but some twenty years previously it was more conspicuous, the falling-away being mainly due to the action of the plough during many seasons.

In Barking lane, at the corner of Loxford lane, was another bench-mark 27 ; while beyond Loxford cottage, the trend of the southern boundary was then, as now, well defined by the natural falling away of the land from 3 to 5½ feet ; while all traces of a rampart (if any had existed), had quite disappeared, even before the time of Morant.

Near Lowbrook cottage, the ground slopes southward towards the railway and marsh, the continuation of the old footpath crossing a small stream, Loxford brook, which is one of the many tributation of the Roding. This brook is better known in its upper course as “Seven Kings Brook," and of late years this name has been given to a new building locality on the Romford road, across which the small stream runs. In Morant it is mentioned as the "King's Watering”.

On the other side of the Roding in Little Ilford, there is a bench-mark, put up on the river wall, 17.2.

Footnote:
(3) The name of Lavender occurs in the registers of Barking: and Mr. Hunsdon was born at Bennetts Castle in Rippleside.

The earliest distinct record of these ancient earthworks was contained in the MS. history of Barking, compiled about 1750 by Smart Lethieullier, of Aldersbrook in Little Ilford : and from this source the following description was published in 1796 by the Rev. Daniel Lysons, F.S.A., in the Environs of London (4): —

In the fields adjoining to a farm called Uphall, about a quarter of a mile to the north of Barking town, is a very remarkable ancient entrenchment : its form is not regular, but tending to»a square; the circumference is 1,792 yards, inclosing an area of 48 acres, one rood, and thirty-four perches. On the north, east, and south sides it is single trenched ; on the north and east sides the ground is dry and level (being arable land), and the trench from frequent ploughing almost filled up : on the south side is a deep morass : on the west side, which runs parallel with the river Roding, and at a short distance from it, is a double trench and bank : at the north-west corner was an outlet to a very fine spring of water, which was guarded by an inner work, and a high keep or mound of earth. Mr. Lethieullier thinks that this entrenchment was too large for a camp : his opinion therefore is, that it was the site of a Roman town. He confesses that no traces of buildings have been found on that spot, which he accounts for on the supposition that the materials were used for building Barking Abbey, and for repairing it after it was burnt by the Danes. As a confirmation of this opinion, he relates, that upon viewing the ruins of the Abbey church in 1750, he found the foundations of one of the great pillars composed in part of Roman bricks. A coin of Magnentius was found also among the ruins.

The only addition we find, is in Mrs. Ogborne’s ‘History of Essex’, 1814; who writes, that the mount was then "about 94 yards round the base, and about nine in height on the side of the river"; and adds, "The extent and shape are nearly the same as that at Pleshey, in this county, which Mr. Strutt describes (5) as a full mile in circumference, not far wide of the long square, with the corners gently rounded off; and of this form are the greater part of the Roman camps discovered in England."

It is evident from the brief description given by Morant in 1768, that he had no knowledge of, or access to, the above MS. account ; but Richard Gough, F.S.A., makes mention of these ancient entrenchments (6); adding, "Whence the latter town undoubtedly had its name, Berg-ing, q.d. the fortification in the meadows. The north side of it is pretty entire; the side parallel with the road has been ploughed down.” Another derivation has been given as “Burgh-ing."

The pretty vignette of the mound as it was in 1814, was engraved by her husband, John Ogborne ; who also prepared the other views of churches, etc., in her uncompleted volume.

Of early man in the district, we have some good evidence; for at various times, a few stone implements have been discovered, both of paleo- and neo-lithic form. Of the latter, Mr. Worthington-Smith found at Temple- Mills, Leyton, in 1882, three specimens pale buff in colour, which were engraved for Dr. John Evans ; while one found by the writer at Earlham grove, Forest Gate, in 1888, was somewhat larger, and described by Mr. W. Smith as 'a very good example.'

Among several paleoliths, perhaps the most remarkable was one obtained by myself in 1889, on Lake's farm, Cawnhall lane; Wanstead. This had been formed from a piece of tabular flint, and was described by the same expert as "an exceedingly good example of, I suppose, the latest type of paleolithic implement."

From the river gravel at Barking-side pits I have also obtained teeth of horse at a depth of 14 feet, and some portions of the skeleton and teeth of bos primigenius, at about 8 feet.